India-NZ final most watched across all series in WTC 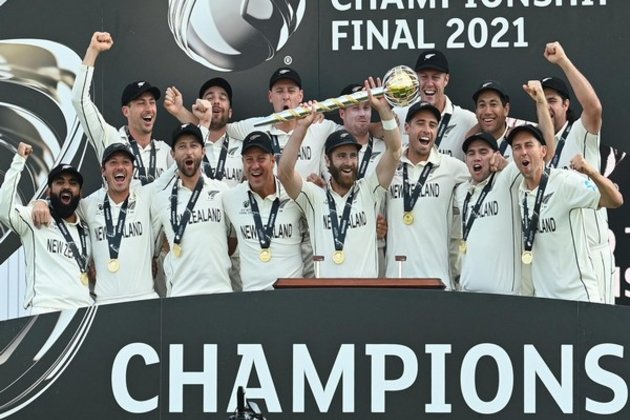 Dubai [UAE], July 28 (ANI): The India-New Zealand final in Southampton last month was the most-watched on average across all series that were part of the inaugural ICC World Test Championship (WTC), recording a total cumulative global dedicated audience of 177 million, with live viewership touching 130.6 million across 89 territories.

India contributed most of the audience with Star Sports and national broadcaster Doordarshan accounting for a whopping 94.6 per cent consumption of the intensely contested match that saw New Zealand complete an eight-wicket win on the Reserve Day, as per an ICC release. In addition to the English-language world feed, Star had produced local language feeds in Hindi, Tamil, Telugu and Kannada.

"The ICC always strives to give the best possible viewership experience and will continue to invest in resources that enhance the viewing pleasure and engagement of our fans. We thank all our partners for contributing to this success and their support in continuing to elevate our standards in the coming years."The viewership was also impressive in New Zealand. Considering its small population and the inconvenient time of broadcast, over 200,000 people stayed up all night or woke up very early in the mornings to watch their team win the battle of attrition and lift the coveted Test Mace on Sky Sport.

In the United Kingdom, Sky Sports recorded the highest-rated match in the 2019-2021 WTC cycle for a match not involving hosts England and the Reserve Day was also the most-watched day of a non-England Test match since 2015.

The launch of ICC's OTT platform ICC.tv resulted in an additional 665,100 live views from over 145 territories outside of the key broadcast markets, totaling 14 million viewing minutes. ICC digital platforms witnessed total views of over 500 million across all video content watched during the match window. Facebook provided most of the consumption across ICC digital assets with 423 million views and 368 million minutes consumed on the ICC Page.

The Reserve Day saw the most views ever recorded across the ICC Facebook page on a single day, with 65.7 million individual views across the 24-hour period, surpassing the 64.3 million enjoyed during the final of the ICC Women's T20 World Cup 2020.

Instagram added a further 70 million individual views across the final, with stories providing nearly 10 per cent of these. Further contributions from the ICC website and mobile app, as well ICC's channels on Twitter and YouTube, took the total video views to 515 million. (ANI)

On September 15, 2021, the heads of government of Australia, the United Kingdom, and the United States announced the formation ...

WASHINGTON D.C.: In a move that highlighted the Biden administration's frustration, the U.S. this week added Guatemala Attorney-General Consuelo Porras ...

WASHINGTON D.C.: Tigers and lions at the Smithsonian's National Zoo in Washington, which were infected last week with COVID-19, are ...

At auction, first printing of U.S. Constitution could see $20 million

NEW YORK CITY, New York: Auction house Sotheby's announced that it will auction a rare first-edition printed copy of the ...

MANILA, Philippines: Boxing legend Manny Pacquiao has announced that he will run for president of the Philippines next year, criticizing ...

WASHINGTON, D.C.: Cracking the whip against Big Tech companies, such as Facebook and Google, a bipartisan group of U.S. state ...

NEW YORK, New York - Stocks in the United States rallied on Thursday."This is a follow-on rally from a very ...

NAIROBI, Kenya: Netflix is offering viewers in Kenya a no-charge option, with one-fourth of the content platform's television shows and ...

AMSTERDAM, Netherlands: Royal Dutch Shell has made a major commitment to manufacture low carbon emissions aviation fuel over the next ...

SYDNEY, NSW, Australia - Stocks in Asia forged ahead on Thursday as fears over an imminent collapse of China's largest ...