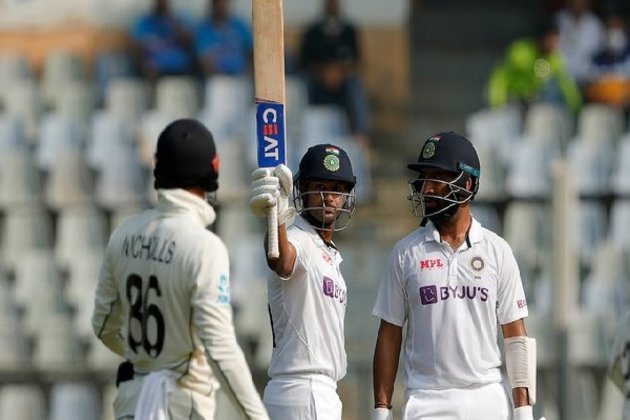 Mumbai (Maharashtra) [India], December 5 (ANI): Mayank Agarwal and Cheteshwar Pujara lost their wickets but India extended its lead to 405 against New Zealand on Day 3 of the ongoing second Test here at Wankhede Stadium, Mumbai on Sunday.

At the lunch break, India's score read 142/2 with the hosts leading by 405 runs. Virat Kohli (11) and Shubman Gill (17) are currently unbeaten at the crease.

Resuming Day 3 at 69/0, overnight batters Mayank and Pujara accumulated runs at a brisk pace and the former brought up his half-century in the 26th over of the innings. Both batters registered the 100-run opening stand in the 27th over.

The 107-run opening stand was finally broken by Ajaz Patel as he dismissed Mayank (62) with the hosts' lead being 370. Ajaz got his second wicket of the innings in the 36th over as he had Pujara (47) caught at the hands of Ross Taylor, reducing India to 115/2.

Skipper Virat Kohli and Shubman Gill then ensured that the hosts do not lose any more wickets before the lunch break.

On Saturday, Mohammed Siraj scalped three wickets while Ravichandran Ashwin registered four wickets as New Zealand was bundled out for 62 after Ajaz Patel had taken all ten wickets to dismiss India for 325 in the first innings.