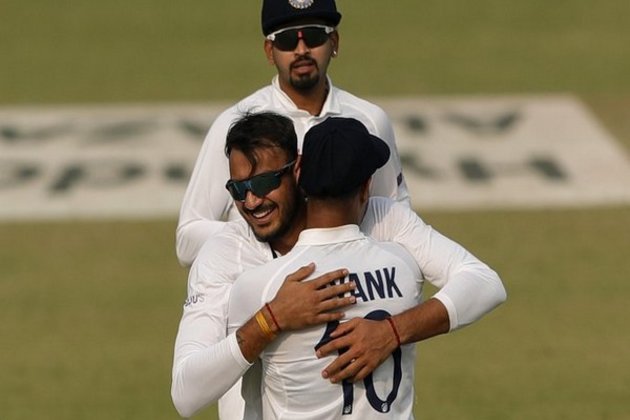 India dominated Day 3 of the second Test against New Zealand here at Wankhede Stadium, Mumbai. In the first Test, Rachin Ravindra and Ajaz Patel have put up a gritty performance to ensure that the visitors walked away with a draw.

But Axar feels India can get over the line this time since there are two days to bowl New Zealand out.

"We haven't planned anything special for him (Rachin Ravindra). We have talked to our bowling coach to know his weakness and will try to bowl there only. We should be patient as that (first Test) time we had less time but now we have two days, so obviously, that's an advantage for us," said Axar while replying to an ANI query in a virtual press conference.

When ANI asked Axar about his camaraderie with all-rounder Ravindra Jadeja, he said, "It's (to bowl wicket to wicket) natural. Whenever I communicate with Jaddu bhai (Jadeja), I ask him about the mental aspect of the game. Similarly in the batting too, we talk about how can we accelerate when we are set or whom to target."Axar on Sunday smashed 41 runs in just 26 balls as India declared at 276/7 to set a mammoth target for New Zealand.

"The way I batted in the England tour and the way I am batting right now, Team has belief in my abilities," said Axar.

"On a previous occasion I had failed to leave a mark but now I converted those chances. And when me, Ashwin and Jadeja all three plays in a game, our batting becomes strong. So its a good sign for the team," he added.

New Zealand batters Daryl Mitchell and Henry Nicholls were the only positive for the visitors on Sunday as Kiwis score read 140/5 at the end of Day 3 of the ongoing second Test against India. (ANI)

Water main break causes homes to be evacuated in Washington

BELLEVUE, Washington: Fire officials in Bellevue, Washington said two people escaped from a home that partially slid off its foundation ...

President Biden and the Democrats were highly critical of President Trump's foreign policy, so it was reasonable to expect that ...

AL-ULA, Saudi Arabia: Shedding light on the lives of the ancient inhabitants of Arabia, archaeologists from the University of Western ...

DUBLIN, Ireland - A father and mother who sexually molested their children and permitted them to be raped and abused ...

Number of births in China lowest ever

BEIJING, China: On Monday, statistics showed Mainland China's birth rate has dropped to a record low of 7.52 births per ...

WASHINGTON D.C.: The U.S. Department of Agriculture (USDA) has said that this year's orange crop will produce a smaller yield ...

SYDNEY, NSW, Australia - Stocks in Asia fell almost across-the-board on Friday, with the biggest loser the ASX.The Australian All ...

LONDON, England: Consumer prices in the UK have risen at their fastest rate in nearly 30 years, but experts warn ...

DUBAI, UAE: Auction house Sotheby's Dubai will sell a black 555.55-carat diamond believed to be from outer space, known as ...

The Day the Earth Caught Fire