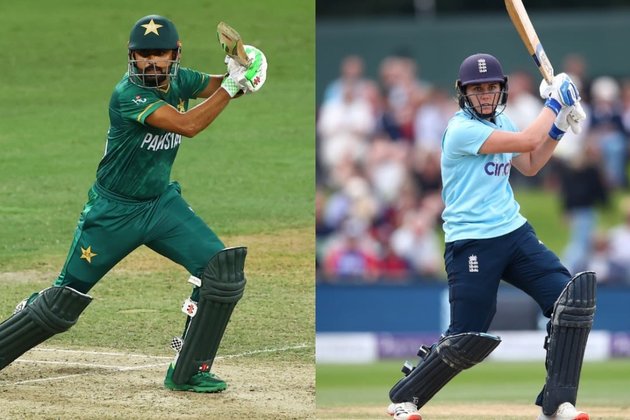 Following his stellar form in 2021, Pakistan's Babar Azam leads the ICC's teams of the year in both limited-overs formats. The Test side, meanwhile, is comprised of a core of five players who were involved in the first ever Championship final - Kane Williamson, Rohit Sharma, Rishabh Pant, R Ashwin and Kyle Jamieson.

In the women's category, Heather Knight captains the ODI team and her England team-mate Nat Sciver was put in charge of the T20I team.

ICC teams of the year

Given 2021 was a T20 World Cup year, there wasn't a whole lot of ODI cricket played by many of the teams. Babar, for example, was picked off a sample size of six matches. He struck two centuries in this period though - 103 against South Africa and 158 against England.

His T20 form was equally eye-catching. Apart from finishing as the top scorer in the World Cup, he made 939 runs in 29 matches with one century and nine half-centuries. The men's T20 list has two more Pakistan players - opener Mohammad Rizwan, who made 1326 runs in 29 matches at a strike rate of 134.89 and fast bowler Shaheen Shah Afridi, who picked up 23 wickets in 21 matches at an economy of 7.86.

Sri Lanka (15), Ireland (14) and Bangladesh played the most number of ODIs in 2021 and their players dominate the XI. Paul Stirling, the top run-scorer in 50-overs cricket last year, opens the batting. Dushmantha Chameera, the top wicket-taker over the last 12 months, leads the bowling attack.

Allrounder Mitchell Marsh, the hero of the T20 World Cup final, has been slotted in at No. 5. He made 627 runs in 21 matches in 2021 at an average of 36.88. He also chipped in with eight wickets. Josh Hazlewood, who also played a key role in the campaign, is the only other Australian in the XI.

The other bowling options in the men's team are Sri Lanka legspinner Wanindu Hasaranga and Bangladesh quick Mustafizur Rahman. Hasaranga had a breakthrough year in the format, finishing with 36 wickets in 20 matches at 11.63, while also contributing handy runs from the lower middle-order. He is currently the No.1-ranked bowler in the format. Mustafizur, meanwhile, bagged 28 wickets in 20 matches at an average of 17.39.

The experienced Sciver made an impact with her all-round performances, finishing the year with 153 runs and 10 wickets at an average of 20.20. Beaumont and Wyatt enjoyed scoring runs together at the top of the order, with the former amassing 303 runs at an average of 33.66 and the latter making 252 at 31.50. Jones impressed with her power-hitting ability, accumulating a total of 151 runs at a strike-rate of 142.45, while Ecclestone picked up 11 wickets in nine matches, at a superb average of 17.18.

Smriti Mandhana is the other opener and the only Indian on either list. With 255 runs at an average of 31.87, she was her country's highest scorer in the format in 2021.

Ireland's Gaby Lewis, who scored 325 runs at an average of 40.62, also made the team. The 20-year-old became the first Ireland women's player to score a T20I century, with her knock of 105* against Germany in the European qualifiers.

Three experienced South African players also made it to the women's XI - Laura Wolvaardt, Marizanne Kapp and Shabnim Ismail. Wolvaardt aggregated 161 runs in eight matches at an average of 53.66, Kapp scored 100 runs in six games and picked up eight wickets, while Ismail bagged 11 wickets at an average of 13.00.

Zimbabwe's Loryn Phiri was also named as one of the bowlers in the XI. The 23-year old offspinner claimed 16 wickets in nine games, including best figures of 5 for 6 against Botswana in Africa qualifiers.

No end in sight as South Africa suffers thru power cuts

JOHANNESBURG, South Africa: More frequent power cuts in South Africa have affected households and businesses across the country, with state-owned ...