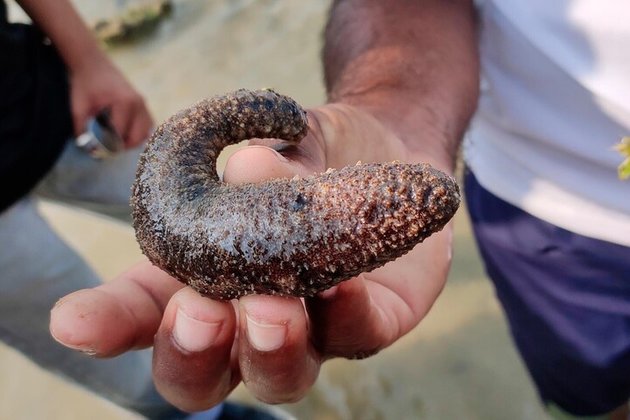 This Far Eastern delicacy used to repulse Soviet people for its frankly yucky appearance. But, for those that weren't afraid to try cucumaria, it continues to be a thing of nostalgia. We explain what it actually is, why people loved it and what to consume it with.

When cucumaria in cans first appeared across the USSR, nobody wanted anything to do with it.

"In those days, workers would periodically get sold grocery sets. One would usually consist of some nice items, like chicken, buckwheat, condensed milk, nice chocolate candies, decent fish and so on. But it always included surplus items - things that nobody was interested in buying," says Vadim, a resident of Russia's Far North.

"This time, the surplus set contained cans of cucumaria and seaweed. And nobody wanted any of that. It would stay there in the buffet, where the sets were sold. The basement was filled entirely with boxes and cans of that ill-fated cucumaria."

The "ill-fated" stuff, indeed, first had no fans among the masses. Firstly, outside Primorye Region and Sakhalin, no one had any idea what it was. Secondly, it looked downright nasty. So, for a time, entire pyramids of cans with the mysterious item sat in stores, collecting dust (even during the deficit!), then disappeared abruptly - that is, after the Soviets finally discovered what it was.

A cucumaria is a mollusc belonging to the Holothuroidea class. It's better known as a 'sea cucumber', named for its resemblance to the fruit of the cucumber plant and is brown or dark purple in color.. It can reach up to 40 centimeters in length and weigh up to one kilogram. 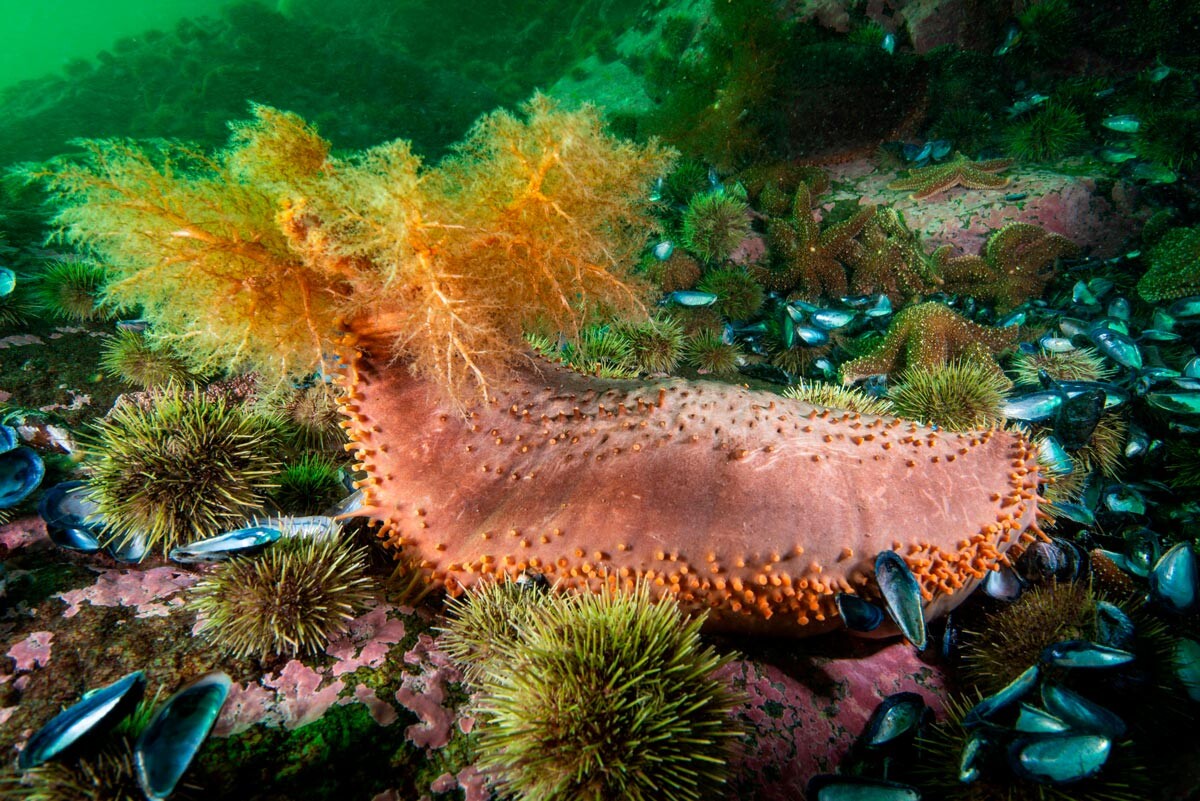 The species lives on the seafloor and travels across it at depths of 5-50 meters, feeding on plankton. This traditional Far Eastern dish is often confused with trepang. The two have a lot in common, such as regenerative abilities. A cucumaria is capable of reconstituting its body from a third of its size: if you were to cut a live one into three, you'd get three new creatures!

As scientists started talking about the immense health benefits of the cucumaria, people began referring to it as a Far Eastern delicacy and those dust-covered cans began flying off shelves, quickly becoming a rarity in most parts of the country.

100 grams of its flesh contains only 35 calories, but is very rich in nutrients: the cucumaria contains as much carotene and vitamin A as beef; it also boasts more than three times the polyunsaturated acids of fish and a whopping 10 times the minerals found in land animals. 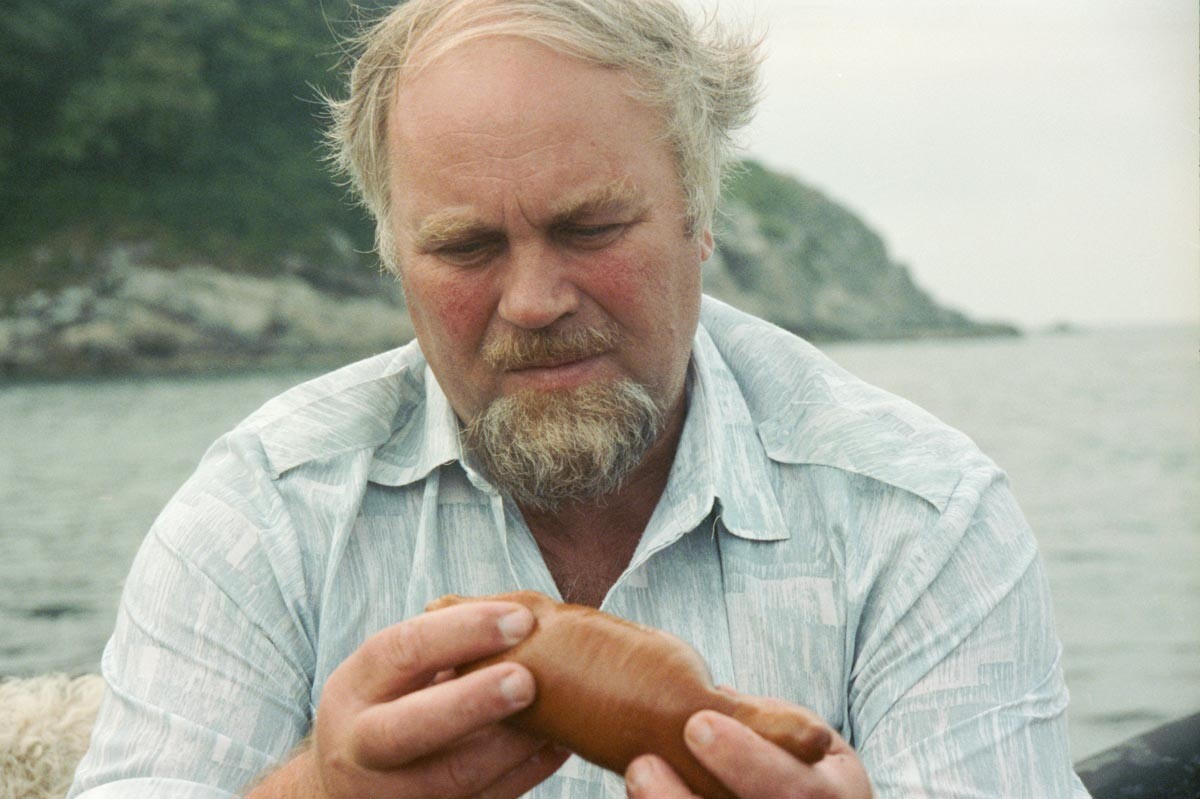 The mollusc's flesh is also valued for its collagen (which replenishes connective tissues) and low carb count, while scientists the world over research it for its medicinal properties.

For instance, an in vitro study determined that frondoside A (one of its chemicals) has cancer-fighting and immunomodulating properties. Another study looked at the molluscs' effectiveness for treating Alzherimer's disease - owing to its polysaccharide content.

How it is consumed

First, a cucumaria is peeled, sliced down the center and its innards are removed. Then, there are several options: it can either be frozen or boiled immediately. Preparation for the latter takes three-four hours.

Russians usually don't consume cucumaria raw (unlike the Chinese and Japanese, where it's popular as sashimi). Here, they boil, dry or preserve it. The latter option is the most popular, as it makes transportation and storage easier. The dish is mostly conserved in sea kale - as the Soviets remember it. 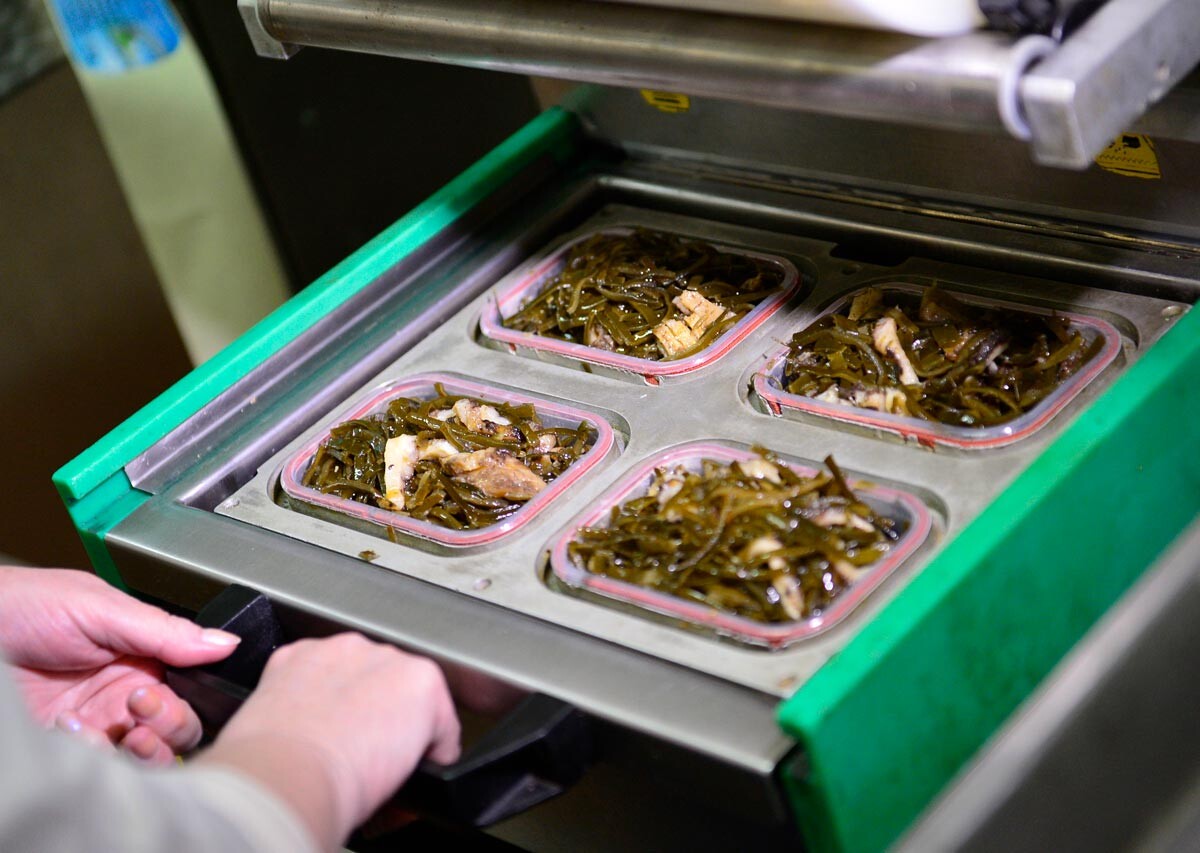 In reality, however, you can do anything with the molluscs: fry it, saute it, or make risotto or salad. "I think that it's best with meat and vegetables. I wouldn't go for anything overly extravagant in terms of spices, as its own taste is quite neutral," says Dmitry Kemyashov, chef at Ostrov Russkiy restaurant. "Simple salt and pepper are good, as are tomatoes. Soy sauce and various Japanese and Chinese traditional products also fit the bill, owing to their geography. You can make a salad: fry the cucumaria, add vegetables and soy sauce." 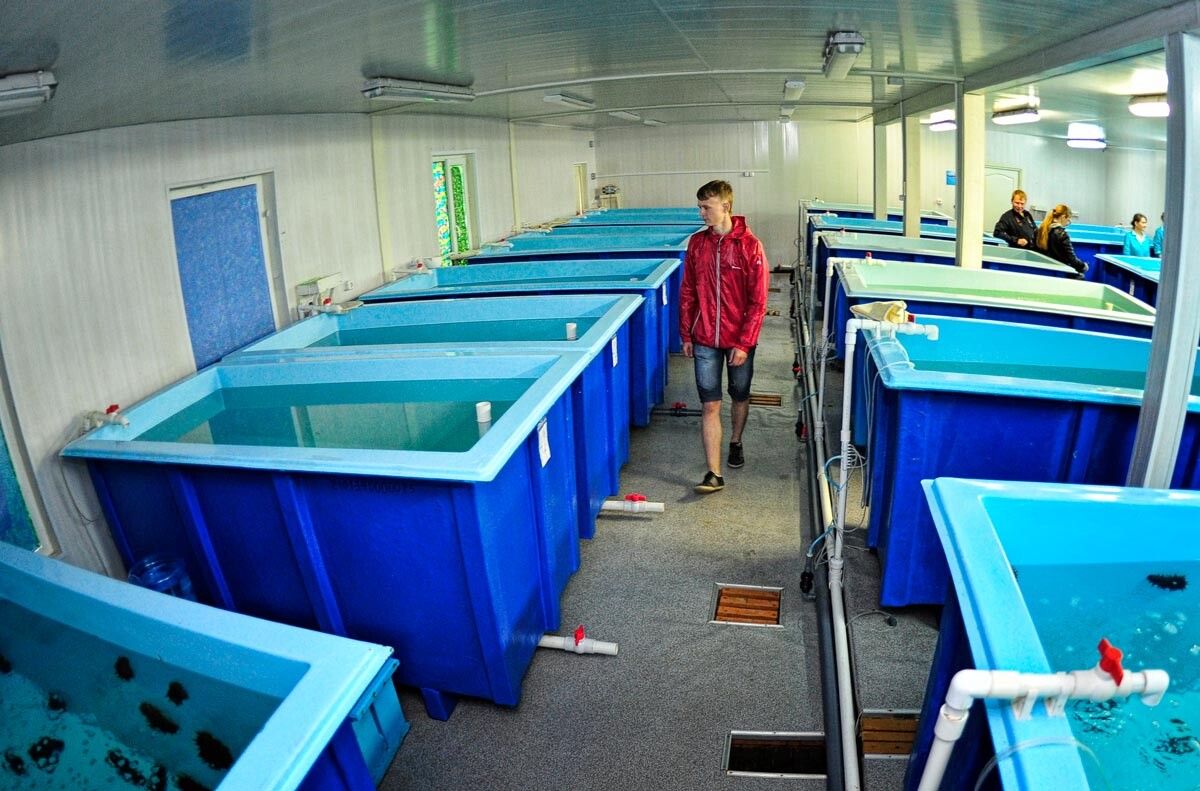 The most traditional cucumaria dish in the Far East is the 'scraper'. It starts with frying carrots and onions, with tomatoes added into the mix later. One can also add meat stock for a fuller taste. Diced cucumaria is then added, together with meat (beef, for instance), followed by some bell peppers at the end. Simmer until ready! 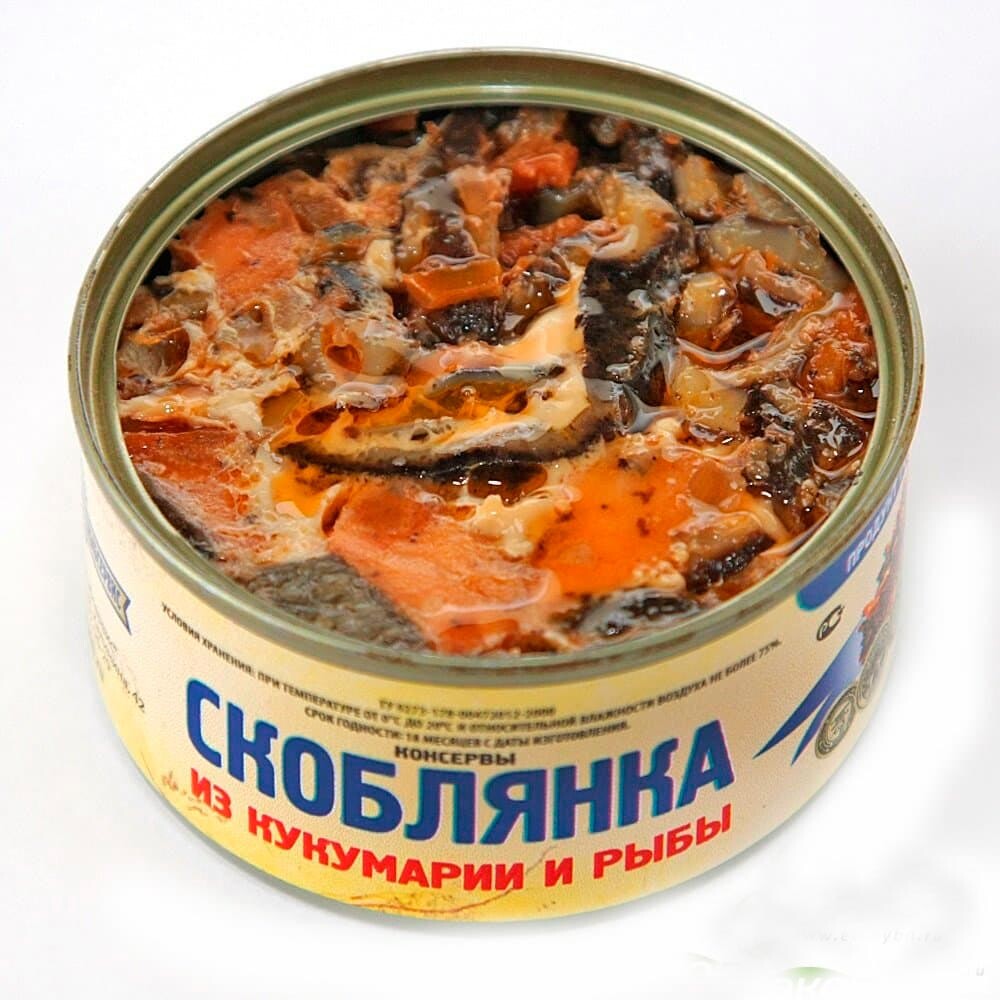 But despite the mollusc being caught at industrial rates in Russia, finding it outside the Far East isn't easy these days - despite the modest price of 200 rubles (approx. $2.60) for a can.

Please enable JavaScript to view the comments powered by Disqus.