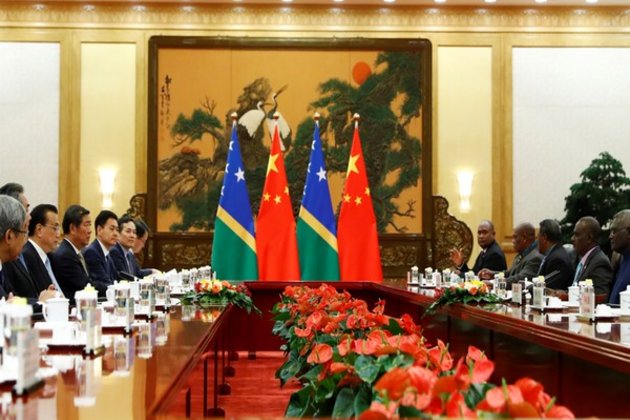 Honiara [Solomon Islands], May 18 (ANI): Even as Australia and other nations, attempt to challenge China's recent moves in the Pacific of signing a security pact with the Solomon Islands, the Asian giant's expansion is being attributed to the strong economic ties it forges with the tiny Island countries.

For countries like Australia and New Zealand, as well as the US, throwing aid and little else at the islands may no longer be enough to keep them on their side as China makes inroads with a seductive mix of money, security and ceremony, Asia Nikkei reported.

"Something China is very good at is cultivating those political-level relationships with Pacific island leaders," Mihai Sora, a research fellow at the Lowy Institute think tank and a former Australian diplomat posted to the Solomon Islands and Indonesia was quoted as saying.

Furthermore, a Brookings Institution report by Jonathan Pryke from 2020 noted that two-way trade between China and the Pacific region had overtaken that of Australia since 2013, excluding Papua New Guinea.

"You can't ask Pacific island countries to choose between income versus an alliance (of) like-minded powers," Sora said. "Better diplomacy is part of the answer, but it's not the whole answer."Amid concern about China's other moves in the region besides the security deal -- lately it has also provided policing equipment to the Solomons and military equipment to Fiji, as well as loans to shore up pandemic-hit Pacific economies -- Western allies are keeping the jabs flowing, the report said.

It has also been speculated that China is using the COVID-19 pandemic, and its vaccine diplomacy to further its reach in these Pacific countries.

China denies exploiting the pandemic to bolster its influence, or engaging in vaccine diplomacy at all. "China's vaccine assistance to [the] Solomon Islands is sincere, without any conditions attached," Ambassador Li reportedly said last July. "China never pursues 'vaccine diplomacy' and has no intention to compete with any other country on vaccine assistance."When asked if the recent security agreement between China and the Solomon Islands came as a surprise, a former senior official from New Zealand told Asia Nikkei on condition of anonymity, "Not at all." The ex-official noted China's ambitions in the Pacific had been visible for some time.

With or without a base, the pact is seen as a potential game changer. In a Brookings article, foreign policy analyst Patricia Kim raised the question of whether it "heralds the rise of a more activist China that is now willing to extend military support to other states in its concerted search for allies."A way forward could be to forge more well-rounded relationships, with countries like the U.S., Australia, Japan and New Zealand pooling resources on "large-scale infrastructure projects and projects that deliver a security dividend as well an economic dividend," Sora suggested.

Some steps are already being taken with Australian local media reporting last year that the country was ready to dole out hundreds of millions of dollars for Pacific projects, the report said.

Last Thursday, a joint statement from a European Union-Japan summit committed to deepening "ties with the Pacific island countries to strengthen good governance and resilience."However, for residents of these islands, all this geopolitical jockeying can seem a world away from their daily needs, the report said.

"Whether or not China establishes a military base in the Pacific," Sora said, adding, "it doesn't really solve the day-to-day development needs and livelihood needs, education and health needs of people in the Solomon Islands." (ANI)