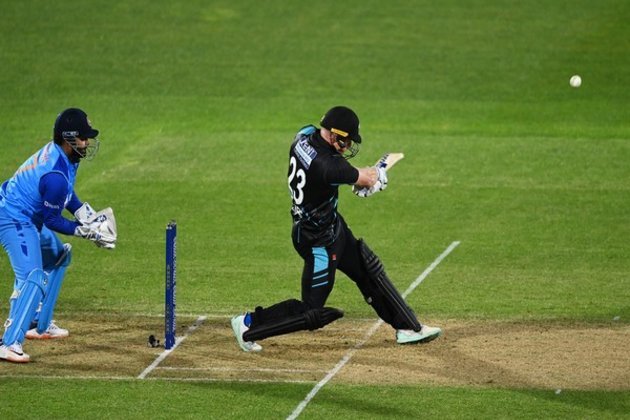 Napier [New Zealand], November 22 (ANI): Brilliant bowling spells from Mohammad Siraj and Arshdeep Singh undid the hard work of half-centurions Devon Conway and Glenn Phillips and bundled out New Zealand for just 160 in their third and final T20I of the series at Napier on Tuesday.

Batting first, New Zealand faced a jolt in the second over as pacer Arshdeep Singh trapped Finn Allen leg-before-wicket for just three runs off four balls. NZ was 9/1 in 1.3 overs.

Mark Chapman joined Devon Conway, the other opener. Both started to hit Indian bowlers with some clean strikes. Conway in general looked aggressive, smashing Arshdeep for two fours and a six in the fourth over.

The duo were slowly building a good partnership but Chapman found Arshdeep at mid-on on Mohammed Siraj's second delivery of the spell. Chapman was back for 12 off 12 balls. Kiwis were reduced to 44/2 in 5.2 overs.

The duo started to rebuild the innings and took their team into the second half of the innings safely. At the end of 10 overs, New Zealand was at 74/2, with Phillips (14) and Conway (38) at the crease.

Phillips and Conway brought up their fifty-run stand in 43 balls.

In the second half of the innings, Phillips upped his run rate, smashing Bhuvneshwar Kumar, Yuzvendra Chahal and Harshal Patel for fours and sixes. Conway brought up his half-century in 39 balls, while Phillips brought up his eighth T20I fifty in just 31 balls.

India continued to make a comeback in the match. As the pair of Siraj and Pant dismissed a dangerous James Neesham for a duck. In 17.1 overs, NZ had lost five wickets for 147 runs.

Mitchell Santner was Siraj's fourth wicket, he was back in the pavilion for just one.

Kiwis' collapse continued as all-rounder Daryl Mitchell was dismissed for 10 off five balls and Ish Sodhi was also dismissed. Arshdeep got both the wickets, taking his wicket tally to four. NZ was at 149/8.

Adam Milne was run out by Siraj for zero. Kiwis finished their innings 160 all out, with Harshal Patel taking the last wicket, dismissing Tim Southee for six.

Mohammad Siraj was the pick of the bowlers, taking four wickets for 17 runs in four overs. Arshdeep also took 4/37. Harshal took a wicket.